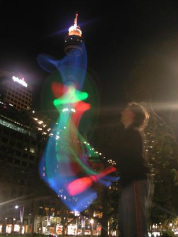 Tom is an Australian engineer with a background in robotics, a wealth of software experience, and a mix of failure and success in the startup world. He has spent the last ten years in consulting and permanent roles in various industries while working on side projects and startups by night.
​
Tom has a combined B.E./B.Sc. from Sydney University majoring in Mechatronics and Computational Physics respectively, and a Ph.D. in Robotics from the Australian Centre for Field Robotics. He currently lives in Melbourne, Australia where he focuses on being the best husband and father he can be to his wife and three young children. Somehow he still finds time to be the Head of Engineering for Cooltrax in between designing board games, riding a motorbike at exactly the speed limit, and practicing Hammock-Driven Development.

And yes - that list is intentionally jumbled up. It covers fields as disparate as Human-Computer Interfaces, Asteroid Harvesting, Computer Vision, Autonomous Robotics, and Augmented Reality. But what do they all have in common? Mechatronics!

My CV is on Linkedin. If you're working on something I'd enjoy, please get in touch.