Half the Battle is a tactical game of positioning pieces and making difficult choices, with characters inspired by Dungeons and Dragons. All moves and actions are open, and each player has broadly the same opportunities and options, so you win or lose on the strength of your choices not the roll of the dice. The gameplay involves very little luck at all, using dice to track hitpoints and available actions but not for rolling outcomes. With the addition of some randomly chosen items from the bag of holding, there's just enough luck to keep things interesting without overpowering the satisfaction of a well-executed strategy.

Players control a party of adventurers, each of which is unique and useful in different situations. Their three to five abilities are given on a card, and their position on a simple linear track is marked with a token. A die placed on this token marks the character's hitpoints, which also control which of those abilities is available for use. In each round of play, each player selects a character in turn and then gets to use that chosen character, again in turn. This means the first player gets freedom of action, but the second gets more information to work with.

So players must constantly balance offensive and defensive tactics while thinking about positioning and counter-moves. Characters have devastating spells and weapons but can only use their most powerful when on full health, or in a spectacularly fatal and final move. But beware - each party is also allied with a monstrous beast with its own unique skills that ramp up as the battle escalates.

After all, knowing the game is only Half the Battle...
You can now purchase a copy print-on-demand from The Game Crafter. As of April 2020, v1.1, this is now strongly recommended! This is the same version that will be demonstrated to publishers (assuming our world does eventually return to normal...)

Alternatively, the rules and print-and-play PDFs of items and all characters in the "A" Team are available to download below. These have been updated from time-to-time, and the changelog at the bottom of this page describes the major differences. With the aid of a shoelace and a printer, you can easily playtest HtB yourself using just two sets of the 7 standard D&D polyhedral dice, available from any game store.

Please send any questions or feedback to tom@jugglethis.net.

Print the items below double-sided on A4 or US Letter paper (both file types are provided), then guillotine and ideally use a 4mm corner-cutter on the corners. 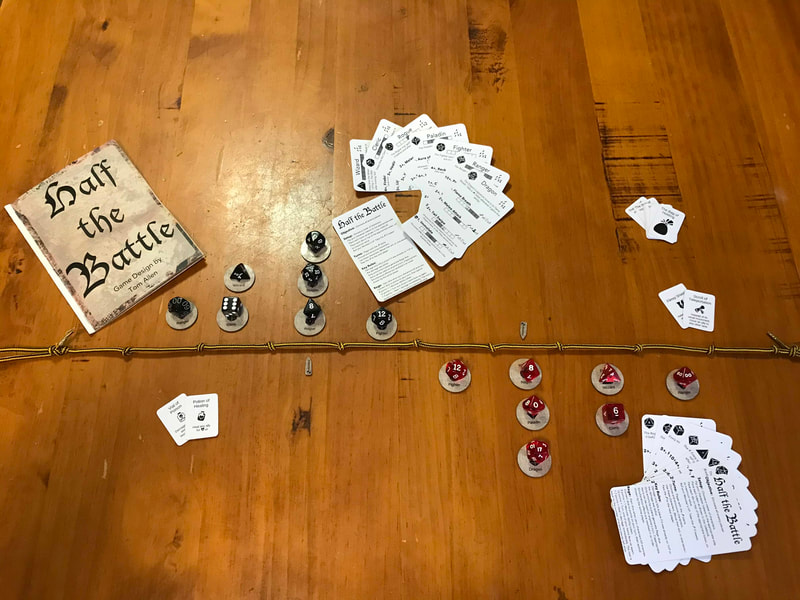 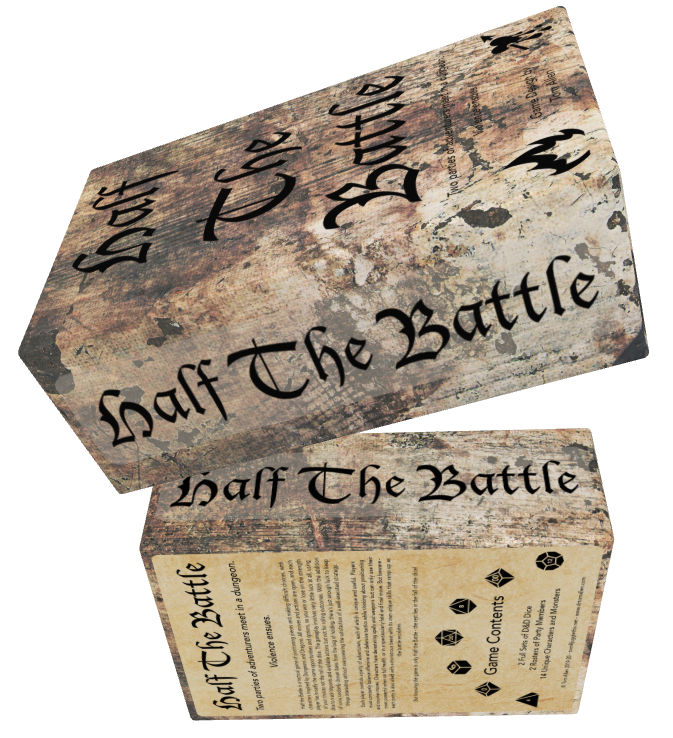 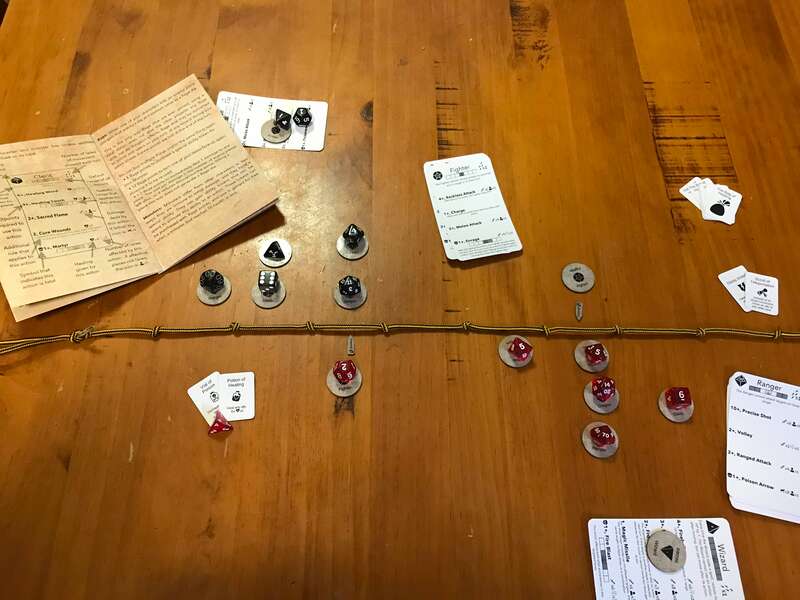 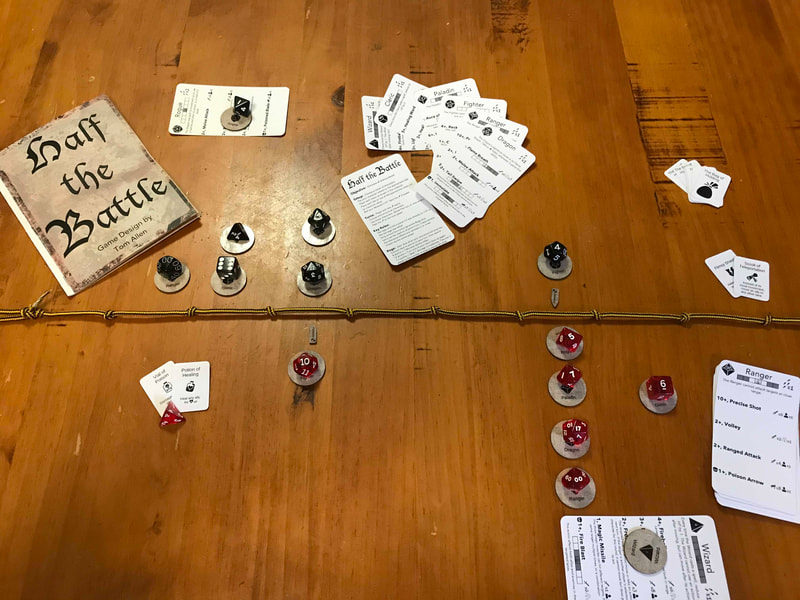 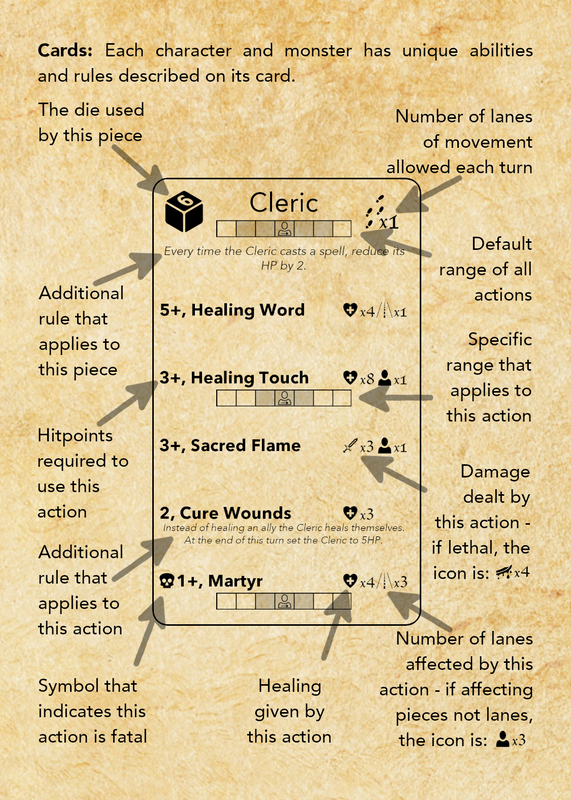 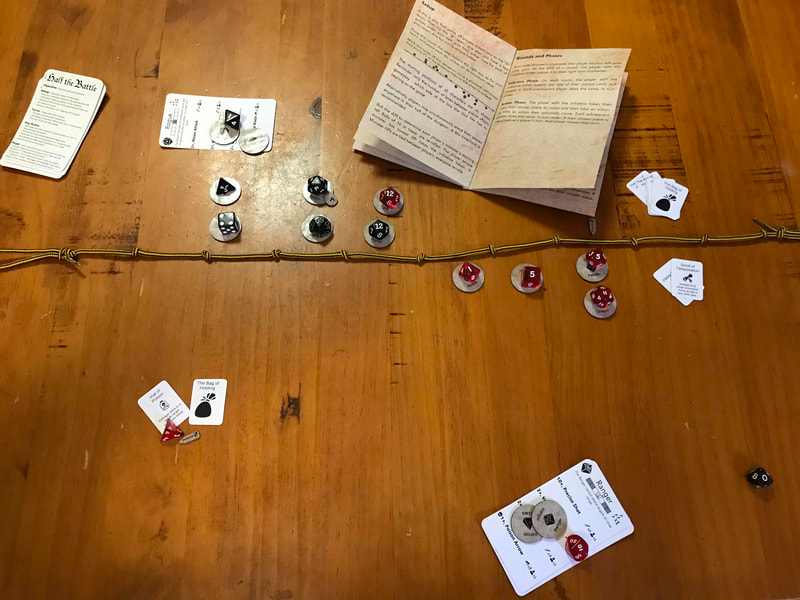 Apr 2020, v1.1 - Major rulebook overhaul to improve the learning flow.
- Potion of Initiative gives next player initiative token for the turn afterwards.
- Sorcerer’s Thunderstep now allows choice of source lane or destination lane taking the damage.
- Lich’s Cursed Ground no longer gives Rage dice.
- Barbarian's Primal Savagery is now correctly fatal damage, not regular.
- Updated Guide Card regarding flipping a card with Rage points.
- Minor tweaks to the B team to give more use of the lock-and-kill theme of this roster.

Apr 2020, v1.0 - It's done! Over the last two months since v0.62 was released there have been no major changes required. Minor tweaks to the wording of some rules and card text has been made, and the manual has had an overhaul. However, the game is stable and working as intended. And - at long last! - the print edition now includes a custom laser cut board to play on. It's ready to go! The next steps are for you to grab a copy and share it with your friends. In the meantime, I will attempt to demo to publishers (probably a digital form on Tabletop Studio) and raise awareness. If you enjoy Half the Battle, please do tell your friends - it would mean a lot to me.

Feb 2020, v0.62 - Adjusted rules for Rage; once per turn only, one purchase only, dice received only at end of turn. Rage was introduced to add an engine to the game and to improve the end-game. In its first incarnation it "fixed" the end-game by eliminating it entirely in most cases! It's now better and a little more sane.

Jan 2020, v0.5 - Added concept of Rage. Players acquire the dice (at max value) of any pieces they kill as Rage points. These points can be spent to purchase the Monster's special ability token (8 points) or for a second use of one of your items from the Bag of Holding (12 points). Or they can be spent to damage enemy pieces immediately, at a cost equal to the number of enemy pieces left alive.
- Monsters no longer gain their special ability twice as they lose health, just once. It can also be purchased with Rage points.
- Many characters may now optionally use their Fatal action on HP values above 1. This provides a trade-off; sacrifice a piece earlier than otherwise necessary, but deprive an opponent of the opportunity to gain Rage.

Dec 2019, v0.4 - Added the initial items for the Bag of Holding. Players draw two cards from this deck at the start of play and leave them face up so all players can see them. These are single-use items that can be used at appropriate points in the game. They are turned face down after use.
- Added several aspects of optionality to otherwise situational abilities.

Nov 2019, v0.3 - Split the basic turn into a character selection phase and an action phase. A new token denotes which player is going first in this turn. That player first chooses and reveals their chosen character for this turn. The other players then do the same in turn order. With characters now locked in, the first player does their movement and/or action using their selected character. If a character dies before a player can use it, they do nothing during this phase.
- Tested variants of simultaneous reveal, ordered reveal, etc before settling upon the above ruleset.

Nov 2019, v0.2 - Added the B team of characters.
- Removed 'wake' ruleset entirely. Monsters are awake from start of game.
- Lots of tweaks to character action values and effects.

Oct 2019,  v0.1 - Initial playtests, finding the fun. The "if reduced from above 1HP to below 1HP you remain on 1HP" core mechanic is clearly identifiable as the core gameplay hook at this point.